The United Kingdom is one of the prime locations to settle for people across the globe. The glorious past, high standard of living, renowned educational institutes, world-class infrastructure, well-paid remuneration, great social security are few of the great motivations for people to settle down in this country. Naturally, such people who are planning to permanently or temporarily emigrate would be curious to know about the cost of living in the UK.

Apart from that, Indian students who are planning to go to the UK to pursue higher education would also be interested in knowing the cost of living in the United Kingdom.

In case you are looking to settle down in the UK and wondering about what might be the cost of living in the UK, the article aims to assist you with that. Now, before jumping to the cost part, it is better to understand what the United Kingdom exactly consist of.

The UK consists of a group of islands off the northwest coast of Europe. It is uniquely made up of four nations which are England, Wales, Scotland and Northern Ireland. If we just count England, Wales and Scotland than the combined area is called Great Britain.

London being the financial hub and capital of the United Kingdom is one of the most expensive places to settle down. Other famous cities like Manchester, Glasgow and Edinburgh are the better options if you are living on a tighter budget.

Here is a breakdown of the major living expenses in the UK:

Note: All figures are represented in British Pounds, the official currency of the UK. 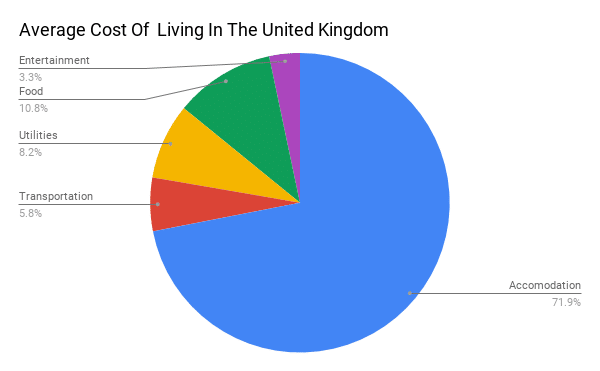 A large chunk of your expense will be spent on finding yourself a comfortable accommodation in a new city that too in a new country. As you can see in the graph above, accommodation alone may consist of upto 60 to 70% of your total expenses. Metropolitan hubs in the UK like London, Bermingham or Manchester can be relatively expensive places to reside. However, you can find cheaper accommodation options by moving a little away from England to places like Glasgow and Belfast.

Keep in mind that, in general, the southern part of England is more expensive than northern England. A comfortable, budget-friendly apartment in the UK can cost you anywhere between £700 – £1700 depending on the location and the size of apartment you are looking for. You can get a cheaper apartment too if you decide to move into interiors. Here is a breakdown of rent in London against that of rent in Glasgow for a month to give you a better picture.

City
Cost of Rent per Month

If you plan to live away from your workplace or educational institute to save the cost of your accommodation, you might end up spending a considerable amount of money on transportation. While buying or renting a personal vehicle is fairly expensive in the UK, you can take advantage of last-mile connectivity provided by the UK public transport which offers common monthly passes for buses and metros and therefore, is a more viable option to commute. Further, students can get an attractive discount on monthly passes.

Not just rent but even transportation cost in London is about 20% higher than in major cities of other EU countries. Here is a breakdown of the average travel cost in the UK across two locations.

Utilities including electricity, gas, broadband and water are some other expenses that you need to incur once you start living in the United Kingdom. This list can vary according to your requirements from time to time.

On average you need to spend around £90 on utilities. The prices can again vary according to your location but the variation is not very high. To give you an idea, here is a breakdown of utility bills in two different England cities.

Food is an important and necessary aspect to consider while shifting anywhere. Cost of food is higher in the UK as compared to other European countries. An average weekly grocery bill can cost you around £60 while a single meal at an Indian or Chinese restaurant can cost you anywhere between £10 -£25. So if you are crazy for dining-out, be careful as that may create a hole in your pocket! However, fast-food chains offer cheaper alternates and you can get a McDonald’s meal at as low as £5!

Here is a breakdown of food in London as compared to other cities in the United Kingdom.

City
Lunch for two at a restaurant

The United Kingdom offers a wide array of entertainment options ranging from theatres to nightclubs. Watching a movie can cost you anywhere between £10 – £15 and entry for theatres is more than £25.

Here is an insight into how much you can spend on average on entertainment while living in the United Kingdom.

Living in the UK has a lot of benefits that certainly comes with a cost. The average costs can add up anywhere between £1200- £2600 depending on your location, eating preference and your propensity to save. Places like London and other locations around it can increase your living expenses while other places in the UK can ease down the burden on your wallet. It always pays better to know about the cost of living in the UK before relocating to the British Country and make informed decisions.

Cost of Living in The United Kingdom is a post from: Blog-Best Foreign Exchange

The post Cost of Living in The United Kingdom appeared first on Blog-Best Foreign Exchange.

Beijing has tightened entry restrictions to the city – over COVID-19